End of 2014/2015 Season Summary
There were mixed results for Crowthorne in the various leagues and cups in the team tournaments it plays in (the Surrey Border League and the Berkshire Chess Association). The final positions for the various teams in the 2014/2015 season are as follows:

Summing up: a lot of competitive chess played over the season. Links to full results and tables can be found in the Useful Links page.

Victory in the PP Cup!
The last match of the season was played – somewhat belatedly – on June 23rd and saw Crowthorne beat Reading in the final of the Premier Prescision Cup. The rating-based nature of the PP Cup required Crowthorne to win the match by at least 3.5 – 2.5 (as Crowthorne were the higher rated team). In the event Crowthorne won 4-2, although the match was closer than this score suggested. The full match card can be found on the Berkshire Chess Association web site here.

New fixture dates
The Berkshire A team captain, Mark Taylor, has pointed out the following change and addition to the fixture list. Please note that the Berkshire web site has the correct dates:

Berkshire League
The Sandhurst A v Crowthorne A away match in Division 1 of the Berkshire League has been re-organized, and is now scheduled for Wednesday 8th April.

Premier Precision Cup
By extraordinary feats of prestidigitation and legerdemain, we now find ourselves away to Bourne End in the semi-final of the PP Cup on Wednesday 13th May without having played a match.
To reiterate, and for absolute clarity, although both these fixtures are on a Wednesday, our club night, both are away fixtures.

Mid-Season Update
Here’s how the Crowthorne clubs are faring in the Berkshire and Surrey Border leagues:
Berkshire
Div 1: The B team is in first place (of 9)! Some caution is needed, as a number of teams that have played fewer matches can easily catch up.
The A team is trailing in 7th place (+1 =2 -2).
Div 3: The C team is doing well, in second place.

In summary, mixed fortunes – but plenty of hard-fought chess being played!
For more details, please go to the league web sites in the Useful Links page.

Forced to draw
In round 6 of the 4NCL, Colin Purdon had the following position on the black side of a Slav defence:

Club Night
If view of the fact that both Christmas Eve and New Year’s Eve fall on a Wednesday this year, the next club night will be on January 7th. We have two home matches that evening: Border B vs Reading A and Border E vs Guildford G. We also have a Border D match on the Friday – so please be prepared for a call from a match captain!

With 25 players and a few parents it certainly filled out the Wellington College Social Club. With so many players it was necessary to split the first all-play-all stage into three groups instead of the usual two, otherwise we would have been playing another hour or more into the night.

The winner, winning both his group and the knock out stage, was Dave Herring. Always good to see a new name on the shield; well done Dave. Runner up was Anthony Zhang, who also won his group stage, and again a first time in the finals for Anthony.

The winner of the remaining group was Anthony’s brother Harvey, who sailed through the group stage winning a remarkable seven out of seven games, before losing in the quarter final to last year’s winner, Robert Starley. Robert, in turn, lost to Anthony in a thriller of a game with only seconds on Anthony’s clock at the end and, as noted, Anthony lost to the victorious Dave. The full results are in the attachments. Well done to all players.

The wooden spoon, a particularly grotesque one this year, went to its traditional winner, Mark Wallace, along with a bottle of Prosecco.

Many thanks to Peter Larwood for travelling in all the way from Worthing, and for calling everyone to order to get proceeding underway.

Pawn Avalanche
The match against Drunken Knights produced another interesting game, with Jon Welton’s game vs Gary O’Grady seeing a quite amazing material imbalance. We start with a position arising from the Dutch Defence, with a slightly unusual positioning of a white bishop on c4:

A new way to play against the Alekhine’s Defence?
In the Border League match against Drunken Knights on 19th November, GM Simon Williams came up with a highly creative and original (and, unfortunately for his Crowthorne opponent, highly effective) way of dealing with the Alekhine’s:

Fixture changes
There have been one or two changes to the dates of Crowthorne fixtures since they were first published, for example Crowthorne A v Wellington College A in the Border League. Please continue to use the Surrey Border and Berkshire Chess Association web sites as the “source of truth” for fixture dates.

More Crowthorne Junior Success
Once again Greece proved to be a successful location for a Crowthorne junior, with Louise Head taking second place in the Women’s section of the recent European Amateur Chess Championships, which were held in Eretria between August 26 and September 2.
Well done Louise! 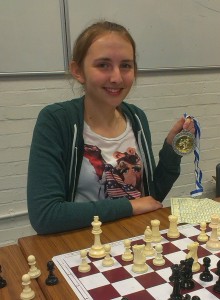 Louise at Crowthorne Chess Club, with her silver medal

Closer to home, Anthony Zhang became Berkshire Individual Champion as a result of his fine performance in the Berks & Bucks Congress, which was held over the bank holiday weekend 23-25 August. He came third outright, with an ECF rating performance of 195, in the top section.
Well done Anthony! 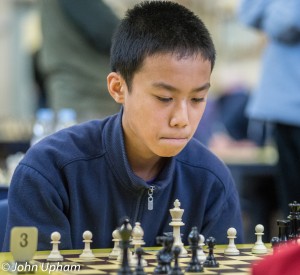 Anthony in action at the Berks & Bucks August 2014

Khyber Cup
The 29th Crowthorne chess club Khyber Cup was held at Dave Herring’s marvellous abode on Saturday 19th July 2014. The usual five rounds of half hour games, with the weather brightening up from nearly raining to scorching, allowing us to play half the games outside in the garden, and likewise take lunch outside at The Prince.

Richard Webb was in attendance this year, having missed the last few years, and once again won the cup – for the seventeenth time! Colin Purdon was runner up, and Neil Binney picked up the wooden spoon. Three Dave’s all scored the same in the middle of the table, and we were all delighted to see the longest travelling player Peter Larwood again.

Dave’s wife provided the most delicious sandwiches and cakes after the event and the Herring family pets entertained us throughout. 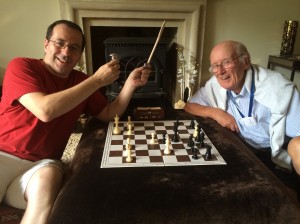 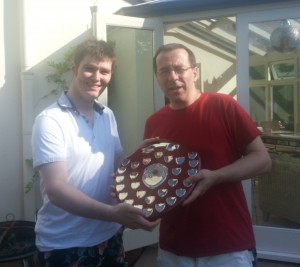 Change of club night
Crowthorne held its last Monday club night on July 7, from now on its club and match night is Wednesday.

Chess Club at the Crowthorne Carnival
The club had a stand at the Carnival Fete, which was held at the Morgan Recreation Ground on July 5th. Club members David Herring, George Green and Colin Purdon took on all-comers at timed chess, in the process having a great time and raising around £40 for charity. 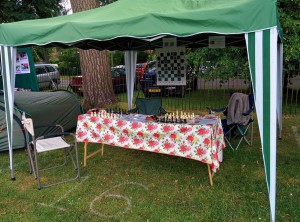 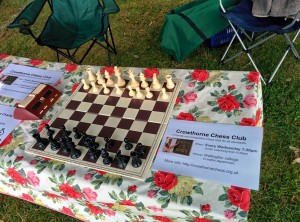 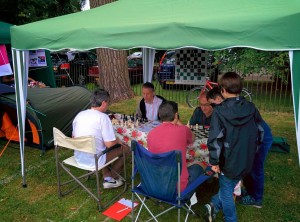 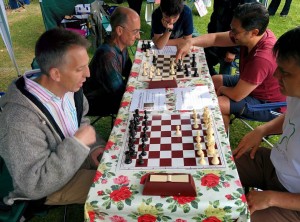 Success in Greece!
One of Crowthorne’s youngest members, Harvey Zhang, had great success in the recent European School Chess Championships that took place 13-27 June. He finished second in the Under-9 section, with the impressive score of 7.5 out of 9. 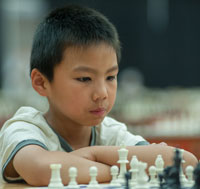 Here he is in action earlier this year, at the Sunningdale e2e4 Easter tournament. The game shows great maturity, especially in the endgame phase:

If you disable cookies in the browser the web site will work apart from the above functionality.
Accept
Manage consent

This website uses cookies to improve your experience while you navigate through the website. Out of these, the cookies that are categorized as necessary are stored on your browser as they are essential for the working of basic functionalities of the website. We also use third-party cookies that help us analyze and understand how you use this website. These cookies will be stored in your browser only with your consent. You also have the option to opt-out of these cookies. But opting out of some of these cookies may affect your browsing experience.
Necessary Always Enabled
Necessary cookies are absolutely essential for the website to function properly. These cookies ensure basic functionalities and security features of the website, anonymously.
Functional
Functional cookies help to perform certain functionalities like sharing the content of the website on social media platforms, collect feedbacks, and other third-party features.
Performance
Performance cookies are used to understand and analyze the key performance indexes of the website which helps in delivering a better user experience for the visitors.
Analytics
Analytical cookies are used to understand how visitors interact with the website. These cookies help provide information on metrics the number of visitors, bounce rate, traffic source, etc.
Advertisement
Advertisement cookies are used to provide visitors with relevant ads and marketing campaigns. These cookies track visitors across websites and collect information to provide customized ads.
Others
Other uncategorized cookies are those that are being analyzed and have not been classified into a category as yet.
SAVE & ACCEPT